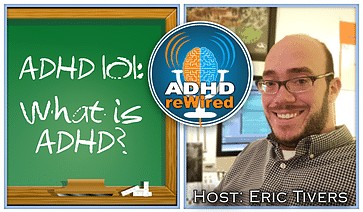 A bonus episode serving as a primer for ADHD basics

What is ADHD, really? In a bonus episode, host Eric Tivers discusses, via analogies and examples, the reality of ADHD. Breaking it down into its separate categories, Eric explains the different standardized presentations of ADHD along with their identifying symptoms. If you or others you know are looking for an introduction to ADHD as a technical topic, this is an ideal place to start.