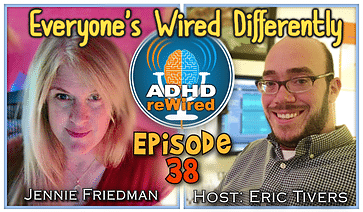 Growing up having a hard time understanding and communicating with others in her family, psychologist Jennie Friedman now better understands the ADHD, anxiety, depression, and more they were dealing with. Switching careers in the middle of her life, Jennie decided to focus on becoming an ADHD coach in order to help both those dealing with the disorder and those living with them.  She talks with us further about her philosophies of embracing our differences, the story surrounding her decision to change her career, and more.

Living with Others with ADHD:

“The most important thing I discovered was that you can be from the same parents and the same environment and the same dinner table and you’re having two different realities. Especially if one of them is wired differently than how you’re wired […] – especially if we have someone with ADHD and someone without – the experience, the perceptions, in real-time, are different. So, when you can know that and embrace that, I think a lot of the judgments that you make as someone typical, you let that go.

How can I judge when everything you’re doing, based on your perceptions, is a hundred percent normal? It’s not about you, it’s about how they’re perceiving everything around them subconsciously.”