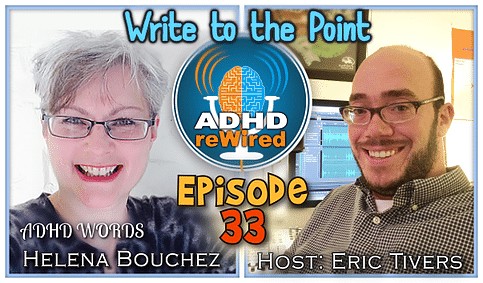 A writing coach and communications consultant recently diagnosed with ADHD, our guest Helena Bouchez walks us through her story of self awareness and discovery of ADHD. Having worked around an airport for a number of years, Helena likens some of her strategies for dealing with ADHD to metaphors of flight terminology. Helena also divulges some strategies for writing business emails effectively and making sure that your most important emails aren’t riddled with spelling and grammar errors. Also discussed is the idea of optimizing one’s time on a particular task versus trying to be perfect.

Draw a large box on a piece of paper. Label one edge of the box “Start” and the opposing edge “Goal”. Draw a line down the center, splitting the box in half so it looks like a soccer field. Now draw a line from Start to Goal that stops halfway there. Draw another line from where you left off that extends half of the remaining distance. Repeat this a few times.

“There has to be some plan in place – some flight plan. And then, you have to trust, what I call, your instruments. In other words, if your instruments are saying that you’re at the right altitude and going the right speed, then you keep going.” — Helena Bouchez