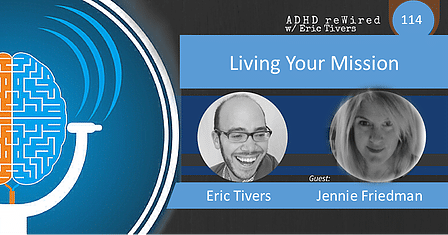 Jennie FrieJennie Friedman is an ADHD coach out of New York. She is the host of the “See in ADHD” Podcast and the co-host of the “The ADHD Couple” podcast. Jennie graced the ADHD reWired studios with her presence for the second time and this show was a lot of laughs as is always the case when Jennie present.

Jennie is a member of Podcast Paradise, an online group of podcasters and after seeking their counsel, she to retool a bit. Jennie has recently re-launched her podcast and has committed to an amazing 5 shows per week. Jennie decided that she has learned a lot since the original launch that she referred to as the “Silent Launch”. Jennie also goes to explain that much of this was do to her having a freak-out over her blog and the pressure she was putting on herself. She finally told herself that if she must write then perhaps it is best she finish her next book.

Jennie and Eric spend a great deal of time discussing Vertical Heterophoria, and the work of Dr. Cheryl Berger Israeloff.   One of Jennie’s listeners and close friends Renee Brooks was recently on a very special show done by Jennie’s See in ADHD’s Podcast.

Somewhere in the second half of this episode of ADHD reWired the show took a bit of a turn as Jennie takes Eric to task on his unwillingness to brand Tom Nardone with the title of producer. Jennie Admits to a bias as she claimed to be a raving fan of Toms. She is perhaps the first person to have finished the book. She even mentioned she has a signed copy of the book that is also signed by Tom’s wife Yvonne. Eric also believes his copy to be signed by Yvonne, but I can assure you it was not.

This show is among the best and it was fantastic to hear Eric and Jennie laugh at themselves and each other throughout the whole show. These notes cannot possibly do it justice so please listen to and enjoy episode 114 of ADHD reWired

You can reach Jennie at http://www.seeeinadhd.com

1 thought on “114: Living Your Mission with Jennie Friedman”