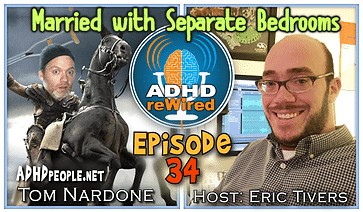 An interview with Tom Nardone from ADHDpeople.net

Frank and honest with himself and others, writer Tom Nardone helps to inspire, communicate with, and provide relatable experiences to readers of his two blogs. With many unique perspectives and stories to tell, Tom’s goal in running his blogs, at TomNardone.net and ADHDpeople.net, is simply to entertain; the rest is all a bonus. Tom discusses the story behind starting his blogs, an interesting sleeping situation with his wife, progress on his upcoming book, and many other topics via his straight-forward, true-to-oneself nature.

“Think of yourself as if you are the person you want to be. Tell yourself that “I am a person that plans” as opposed to thinking that you “will” or “want to” do something. Even if you are not planning, exercising, arriving home on time, or going to bed on time, for example, if you begin to think of yourself as a person who actually accomplishes those tasks, you begin to believe it. Much of our success can be attributed to what we believe is possible. You’ll never believe what you can do until you actually do it.”