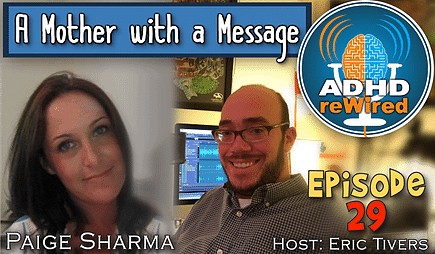 An interview with Paige Sharma, mother of 3.

The open letter she wrote, to an old elementary school classmate, is a touching piece that addresses depression, suicide, and how she found motivation.

A Mother With a Story

This episode, I interview Paige Sharma, a mother of three who caught my attention through an astounding open letter she wrote to a long-lost classmate.

She talks about her story of ADHD diagnosis, concerns over finding the right doctor to treat her and the difference between some of them, and many of the symptoms she experienced that lead her to seek aid and find more information.

The open letter she wrote, to an old elementary school classmate, is a touching piece that addresses depression, suicide, and how she found motivation.

Concerns over finding the right doctor:

“Do not worry about your difficulties in mathematics. I can assure you mine are still greater.” – Albert Einstein

“Excellence is an art won by training and habituation:

we do not act rightly because we have virtue or excellence,

but we rather have these because we have acted rightly;

‘these virtues are formed in man by his doing the actions’;

we are what we repeatedly do.

Excellence, then, is not an act but a habit…”

– Will Durant (my sources tell me this quote was not Aristotle)

“You can make anything a habit, so you can do anything.”
– Paige