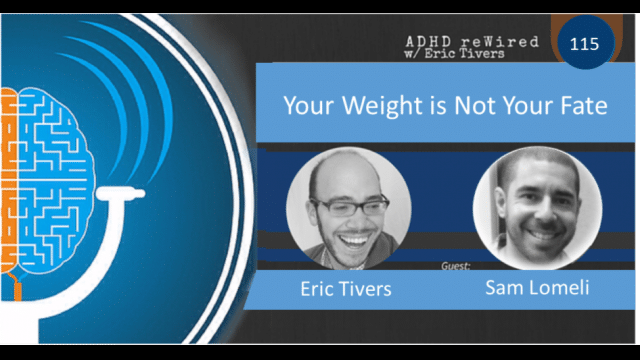 Sam Lomeli is a hero to many people to the ADHD community and may not even be aware of it. Sam is certainly a hero of mine.

Sam grew up being picked on and was the butt of many jokes. Sam was overweight (like Eric was) through the years he spent in school. It was Sam’s calling to ultimately be a champion for people he would meet much later in life.

Sam began his crusade by volunteering at charitable organizations such as: The Salvation Army and The Special Olympics. His biggest accomplishment was his volunteering to build wheelchair ramps for disabled veterans and non-veterans who could not get in or out of their homes. He has built over 200 wheelchair ramps for people without the ability or means to have them any other way. Today Sam helps people believe that they can lose weight like he did.

While speaking to his wife Kristen, he ran the idea of a podcast by her. She told him she never saw her light up like he did when he talked about helping other people, and so the “Tips of the Scale Podcast” was born.

Eric and Sam discuss these things in depth at the beginning of the show and then get more into the psychology of people who are overweight.

Sam mentions he has found so much of a person’s self-worth is tied to their own perception of their appearance. Sam talks about the things people tell themselves about what their self-worth is. His clients feel like their value is determined by their looks and achievements. He further states that these same people have a tough time when asked when is the last time you remember being happy.

They believe that to be happy they must obtain the validation of those who judge them, or of those people who do not struggle with being overweight.

Sam teaches his clients their happiness comes from them feeling good about themselves.
Sam is truly a hero if ever I have heard of one. He has made a career of helping people who are seemingly unable to lose weight and/or feel good about themselves alone. We hope you listen and learn more about Sam and about the “Tips of the Scale” podcast.