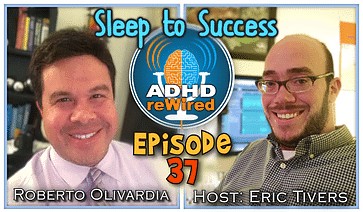 With a history of sleep disorders himself, Dr. Roberto Olivardia talks through his experiences dealing with the effects ADHD can have on sleep. As a clinical instructor of psychology at Harvard Medical School and a specialist in dealing with ADHD, OCD, eating disorders, and more,  Dr. Olivardia shares some of his extensive knowledge with us about various disorders, conditions, and habits relating to sleep. Through addressing these disorders, Dr. Olivardia shows us how one could greatly improve their life.

Effects, Symptoms, and Their Stories:

Pay attention to your sleep. Be mindful of it, track it, and write notes about it. Also, going to bed and going to sleep are very different.