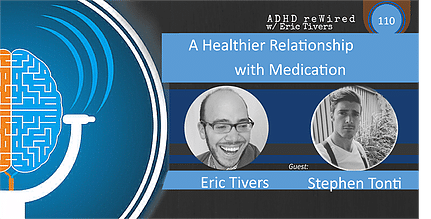 Stephen’s primary focus is writing and directing for film and various other multimedia projects. On top of being a film director, Stephen also tours as a public speaker advocating for men and women diagnosed with ADHD. In 2013, Stephen was selected for the Carnegie Mellon University TEDx Student Speaker Competition. He gave his first speech on the subject there, in front of over 700 fellow students, professors, and various educators. His talk is on YouTube and has gathered almost 680,000 views to date. Stephen is yet unsigned, but will begin giving an updated version of his TED talk on tour later this year.

Stephen graced the ADHD reWired virtual studio this past January. Stephen is quite a character. Stephen, like many ADHD people is quite stubborn, to the tune that he while having an argument with his girlfriend about whether he was ADHD or simply had ADHD, he proceeded to give a public talk to further affirm his point of view. This lead to the end of that relationship.

Stephen has since grown in his knowledge of ADHD. Once believing that medication was only a last result for adults only, he now does not advocate one way or the other. Stephen states that medication alone is no guarantee of success, and that medication too often gets the credit.

Understand and research to find out what ADHD is. Get the whole picture.

ADHD is real. You have ADHD. ADHD is not made up

Get support for your ADHD. Support others who have ADHD. Give ADHD. Avoid shame at all costs!

Today it is quite normal to see and/or hear Stephen Tonti talking to himself. That is talking to himself out loud. He does this even if others are around. There is no need to be frightened this is just one of his own methods he uses to coach himself.